« Back to Blog and Prayer Requests « Older Entry | Newer Entry » 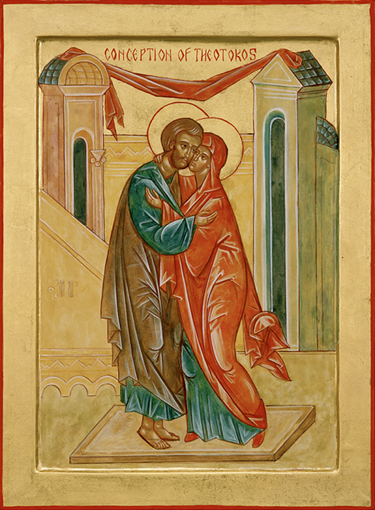 Saint Joachim and Anne are celebrated as models of grandparents, since they are the parents of Mary, Mother of Jesus. We want now to honor them as the first canonized married couple, and so examples of holy married life and ask their intercession for vocations of holy matrimony. All the more since there is great need for couples who live a life of service and love in mutual selfgiving and prayer that sanctifies our world and renders holy the ordinariness of everyday life.

We know very few facts about the life of Joachim and Anne, the only recorded stories being from apocryphal literature, the Gospel of the Nativity of Mary, the Gospel of Pseudo-Matthew and the Protoevangelium of James.

"The Protoevangelium gives the following account: In Nazareth there lived a rich and pious couple, Joachim and Hannah. They were childless. When on a feast day Joachim presented himself to offer sacrifice in the temple, he was repulsed by a certain Ruben, under the pretext that men without offspring were unworthy to be admitted. Whereupon Joachim, bowed down with grief, did not return home, but went into the mountains to make his plaint to God in solitude. Also Hannah, having learned the reason of the prolonged absence of her husband, cried to the Lord to take away from her the curse of sterility, promising to dedicate her child to the service of God. Their prayers were heard; an angel came to Hannah and said: "Hannah, the Lord has looked upon thy tears; thou shalt conceive and give birth and the fruit of thy womb shall be blessed by all the world". The angel made the same promise to Joachim, who returned to his wife. Hannah gave birth to a daughter whom she called Miriam (Mary)." (http://www.newadvent.org/cathen/01538a.htm)

Joachim and anne are usually presented in icons at the moment of their meeting at the Golden Gate of Jerusalem in a loving embrace, described in the Protoevangelium:

"And, behold, Joachim came with his flocks; and Anna stood by the gate, and saw Joachim coming, and she ran and hung upon his neck, saying: Now I know that the Lord God hath blessed me exceedingly; for, behold the widow no longer a widow, and I the childless shall conceive. And Joachim rested the first day in his house."  ( http://www.aug.edu/augusta/iconography/protevangelium.htm)

(The name of the icon above is "The Conception of the Theotokos" - Theotokos is the Greek titile of Mary as Mother of God, and it is depicting the encounter of Joachim and Anne at the Golden Gate)

This is also the third year of this blog that began under the patronage of Joachim and Anne.

Oops, you forgot something.

The words you entered did not match the given text. Please try again.